Wisconsin Representative Mike Gallager: UFOs Could Be ‘Us from the Future’ 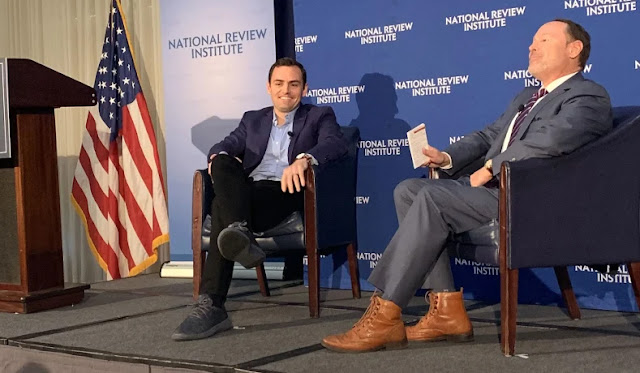 Following an open congressional hearing Tuesday on the subject of what we’re now supposed to call “unidentified aerial phenomena” but used to just call UFOs, Representative Mike Gallagher (R., Wis.) entertained the possibility that UAP could be “us from the future.”
Appearing on the Pat McAfee Show the day after the hearing, Gallagher suggested one possibility that hasn’t been considered for unresolved UAP sightings, in addition to foreign adversaries or extraterrestrials, is that they could be our own technology going back in time to our present.
“Go back 200 years, and you would say, ‘You guys don’t have cars, Internet, good machine guns; what’s going on?'” Gallagher said. “So, go from our point in history, forward 200 years, and whoever’s left, at that point, if we can avoid nuking ourselves, is gonna say, ‘Wait, you guys can’t bend space and time? We figured that out like 50, 100 years ago.”
He added that there’s some scientific basis for this hypothesis, and that it is considered “more plausible” than other theories by “serious people” with credentialed backgrounds who have looked into the question. “We already, my understanding — and again, I’m not a technologist — there is technology, technically, that can do teleportation of something called neutrinos, and technology that proves subatomic particles can move faster than the speed of light. Einstein tells us that’s true. Theoretically, time travel is possible,” he said. “So, that is the third hypothesis: People in the future, us, have figured out how to bend space and time, and it’s our technology coming back from the future.”
Gallagher stressed that he was not “privileging” this theory “over another one,” but was merely emphasizing that “we’ve gotta go into this debate, not foreclosing anything just because we think it’s dumb to talk about aliens, and the Washington Post will call you a conspiracy theorist.”
His comments came after a hearing of a House intelligence subcommittee on Tuesday in which he participated, bringing up a still-unexplained 1967 incident at Malmstrom Air Force Base in which an unidentified object allegedly rendered nuclear weapons housed at the base inoperable, as well as a disputed memo from a past director of national intelligence, Thomas Wilson, which supposedly outlined a whole host of government programs dealing with and overseeing evidence of extraterrestrial encounters.
Gallagher was left dissatisfied by both the open and closed portions of the hearing, as two government officials representing the Pentagon’s Airborne Object Identification and Management Synchronization Group were unable to answer his questions adequately. “I’m still frustrated with the lack of answers,” Gallagher said. “Yesterday was just fundamentally unacceptable.”
The Wisconsin congressman believes a better approach for this important issue, which has critical national-security implications regardless of the ultimate explanation, would be to declassify as much as possible, involve the private sector, and try to get to the true bottom of the mystery. “Let’s follow the evidence wherever it leads. And I don’t yet know where it’s gonna lead. But let’s just follow it.” He believes, furthermore, that, when it comes to the UAP discussion, “the genie is out of the bottle,” and people are going to keep talking about it regardless.” The conversation has increased so much, and there’s a lot of serious people who are interested in it.”
Indeed there are, Representative Gallagher. Indeed, there are.
By JACK BUTLER May 20, 2022