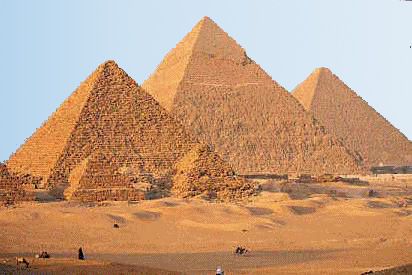 One of the most relevant facts to emerge from the Rendlesham binary code received by Jim Penniston as claimed, is that TWO of the seven sets of geographical coordinates found in the binary code brings attention to the latitude (29.9766248*N) that ran through Giza in 1980 (the coordinates at that time due to tectonic drift). Remember, December 1980 was when the Rendlesham Incident took place.

This latitude ran through Giza at a significant point on the Giza plateau in respect of the monuments. It represented the ‘golden cut’, in that this latitude divided the Phi-ratio to which the three pyramids were each positioned by 1 and 0.618.

Through just two simple calculations (multiplying by 32 and then dividing by 7) the numbers of this latitude 29.9766248 presents us with the number 137.03599908. This number is the inverse (reciprocal number) of ‘alpha’ (the fine-structure constant) - the most mysterious number in physics.

What is extraordinary is that the number 137.03599908 is the latest determination (as announced May 20, 2019) of alpha (the ‘Fine-Structure Constant’) and when we divide 1 by this number we get alpha to 13 decimal places! . . The reason why it has relevance today.

It has been said that a signal or message received from somewhere or ‘somewhen’ else in the universe has to include a mathematical number so special that it leaves no doubt in making the receiver aware that the message was intentionally sent by an advanced intelligence.

Carl Sagan once wrote that the most compelling data of contact from an higher intelligence would be the inclusion in that message of the “nuclear fine-structure constant.” He wrote “This would be a case worthy of some considerable attention.”

All this is even more astonishing when we consider the fact that this latitude is being brought to our attention from what follows logically with a specific location at Giza targeted by both the Nazca and Hy-Brasil coordinates found in the Rendlesham Binary Code that Jim Penniston claims he received while touching a symbol on the side of an “unidentified craft of unknown origin” on Boxing Day morning, 1980.

Think about this. This number, 137.03599908, emerged from a latitude that ran through Giza in 1980 as a consequence of studying the seven sets of coordinates that were encoded in a binary code message received and written down in 1980, but which is the same number only recently determined for the inverse number of the ‘fine-structure constant’ in December 2018, and announced in May 2019, and at the time when I discovered this.

Is this a demonstration of information being sent back into the past from the future, which only has relevance to us today in the present?

Another fact that was made clear in the last chapter of ‘The Rendlesham Enigma,’ is that the meter-measured distances between the significant points of the three pyramids that are each positioned to the Phi-ratio, are not only at multiples of 3.1416 (pi), but also at royal cubit lengths that are subdivisions of the processional cycle of  25,920 years according to the ancient estimate. The key to unlocking these revelations is knowing that the royal cubit used in the construction of Giza and the pyramids was a length of exactly 0.5236 meters . . . 3.1416 (pi) divided by 6.

Again, all these discoveries, including the length of the royal cubit, are the result of studying the coordinates found in the binary code that Jim Penniston claims to have received on Boxing Day morning, 1980 and the additional information that emerged from them. These are all new major discoveries concerning the Pyramid field of Giza.  - Gary Osborn