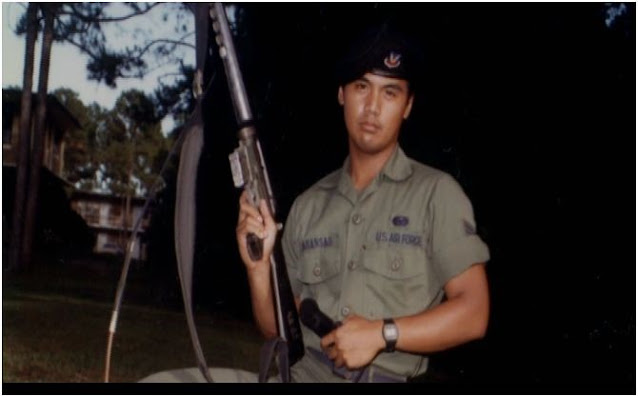 Airman First Class (A1C) Ed Cabansag was strongly "encouraged" or forced to sanitize the events that took place in Rendlesham Forest 1980. He accompanied Jim Penniston and John Burroughs, with investigating a craft of unknown origin, that landed and was sitting\hovering on the forest floor.  The craft emitted a blinding dome of white light with yellow, orangish red and blue lights pulsing near or on the skin of the craft.

The following is the sanitized version of Cabansag's statement he was forced to write and sign.

“On 26 Dec 80, SSgt Penniston and I were on Security #6 at Woodbridge Base. I was the member. We were patrolling Delta NAPA when we received a call over the radio. It stated that Police #4 had seen some strange lights out past the East Gate and we were to respond. SSgt Penniston and I left Delta NAPA, heading for the East Gate code two. When we got there SSgt Steffens and A1C Burroughs were on patrol. They told us they had seen some funny lights out in the woods. We notified CSC and we asked permission to investigate further."

"They gave us the go-ahead. We left our weapons with SSgt Steffens who remained at the gate. Thus, the three of us went out to investigate. We stopped the Security Police vehicle about 100 meters from the gate. Due to the terrain we had to go on by foot. We kept in constant contact with CSC (Central Security Control). While we walked, each one of us would see the lights. Blue, red, white, and yellow. The beckon light turned out to be the yellow light. We would see them periodically, but not In a specific pattern. As we approached, the lights would seem to be at the edge of the forest. We were about 100 meters from the edge of the forest when I saw a quick movement, it looked visible for a moment. It looks like it spun left a quarter of a turn, then it was gone. I’m advised SSgt Penniston and A1C Boroughs. We advised CSC (Central Security Control) and proceeded in extreme caution. When we got about 75-50 meters, MSgt Chandler/Flight Chief, was on the scene. CSC (Central Security Control) was not reading our transmissions very well, so we used MSgt Chandler as a go-between. He remained back at out vehicle. As we entered the forest, the blue and red lights were not visible anymore. Only the beacon light, was still blinking."

"We figured the lights were coming from past the forest, since nothing was visible when we passed through the woody forest. We would see a glowing near the beacon light, but as we got closer, we found It to be a lit-up farm house. After we had passed through the forest, we thought it had to be an aircraft accident. So did CSC (Central Security Control) as well. But we ran and walked a good two miles passed the vehicle, until we got to a vantage point where we could determine what we were chasing was only a beacon light off in the distance. Our route through the forest and field was a direct one, straight towards the light. We informed CSC (Central Security Control) that the light beacon was farther than we thought, so CSC (Central Security Control) terminated our Investigation. Airman First Class (A1C) Burroughs and I took a road, while SSgt Penniston walked straight back from where we came. A1C Burroughs saw the light again, this time it was coming from the left of us, as we were walking back to our patrol vehicle. We got in contact with SSgt Penniston and we took a walk through where we saw the lights. Nothing. Finally, we made it back to our vehicle, after making contact with the PC’s and informing them of what we saw. After that we met MSgt Chandler and we went in service again after termination of the sighting.”