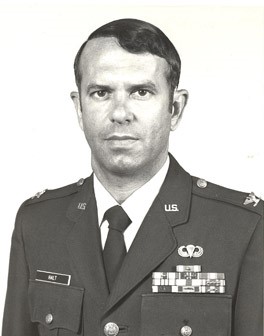 Former Air Force Col. Charles Halt was deputy base commander at a joint British/American airbase, RAF Bentwaters, in 1980. Halt saw a disc-shaped UFO directing beams of light down to the ground near him.

Col. Charles Halt, who, in December 1980, was the deputy base commander at joint British/American airbases, Bentwaters and Woodbridge, in the Rendlesham Forest in England. Over the course of several nights, UFO activity was high at the base, including reports of unidentified objects near the nuclear weapons storage area.

On one evening, Halt was summoned into the forest near the base to investigate a UFO sighting.

"There was a glow in the forest near indentations from where a supposed object had rested two nights before," Halt told AOL News.

"So we went into the forest, and we were examining things, and suddenly, we saw something. We looked out in the farmer's field and there was this almost elliptical object with a black center. It appeared to be winking, is the best way I can describe it, and it was dripping, like, molten metal off it, just like it was shedding something.

"It wasn't perfectly round, it was a little bit flattened, and it moved from side to side, then it came into the forest, moving through the trees, avoiding the trees, it bobbed up and down a bit in the process, and at one point, it actually approached us."

Halt, understandably, became concerned with this chain of events, trying to determine a rational explanation.

"I was thinking ball lightning, what could this be? And then it receded back out into the farmer's field, and suddenly, it just silently exploded into five white objects and they disappeared."

But as Halt would shortly discover, the UFO encounter was far from over.

"Across the road, we stumbled through a creek, got all wet and went out into the plowed field, just looking around, and we looked in the sky and there were objects in the sky -- several to the north and several to the south.

"The ones in the north changed from elliptical to round and had multi-colored lights that were blinking and flashing. They moved at very high speed and sharp angular movements, as though they were doing a grid search or something."

And then, apparently, one of the objects took a sudden interest in the soldiers.

"One of them approached us at very high speed -- I'd say it was at 2,000 to 4,000 feet in altitude, and it came almost directly overhead and sent down the equivalent of a laser beam -- it's the best I can describe it. It did not go like a light beam and fan out; it came straight down, maybe 8 or 10 inches in diameter, and fell just 8 or 10 feet from our feet.

"We stood there in awe, you know, 'Is this a warning, is this a signal, is this a communication? What is this? A weapon?' And just as suddenly as it appeared, it disappeared, and the object moved back away from us a bit, and while we were standing there, then we noticed another object over the Woodbridge base, sending down the equivalent of similar beams."

Whatever it was that appeared in the skies over Bentwaters-Woodbridge in December 1980, Hall points out, wasn't just seen by several Air Force personnel.

"I found out later that British radar had actually picked up some things on a screen -- I didn't know this until recently, because people had come forward after they'd retired. There were two radar confirmations."

Donald Moreland, the British Liason Officer, pressured Halt to report the UFO incident to Britain’s Ministry Of Defence. Eventually, on the 13th January 1981, Charles Halt typed a memorandum and sent it to the MOD with a covering letter from Moreland. In 2005, on the History Channel’s UFO documentary “Britain’s Roswell” Halt explained the memo’s purpose:

“The memo was not meant for public consumption. It was meant as a tickler, if you will, to the Ministry Of Defence to get them involved to do a proper investigation.”

The memorandum first surfaced in June 1983, after a Freedom of Information request from CAUS (‘Citizens Against UFO Secrecy’) who were only aware of Larry Warren’s story at the time. When the document was finally released, CAUS forwarded a copy to one of their investigators, Robert Todd, who we assume began circulating the document.

The Ministry of Defence never replied to Halt’s memorandum. 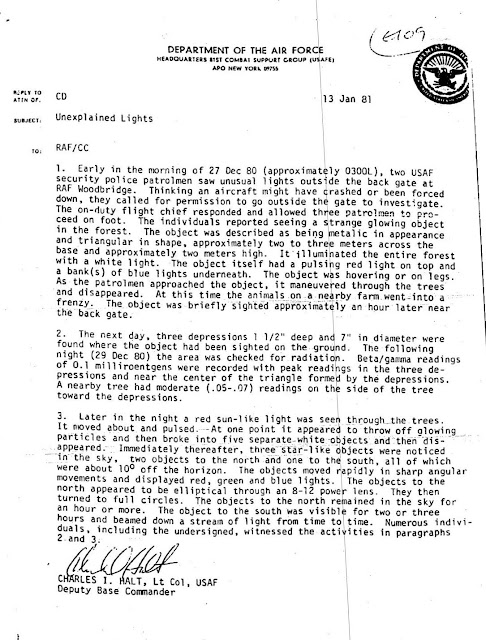 Reply to atin. of: CD

1. Early in the morning of 27 Dec 80 (approximately 0300L) two USAF security police patrolmen saw unusual lights outside the back gate at RAF Woodbridge. Thinking an aircraft might have crashed or been forced down, they called for permission to go outside the gate to investigate. The individuals reported seeing a strange glowing object in the forest. The object was described as being metallic in appearance and triangular in shape, approximately two to three meters across the base and approximately two meters high. It illuminated the entire forest with a white light. The object itself had a pulsing red light on top and a bank(s) of blue lights underneath. The object was hovering or on legs. As the patrolmen approached the object it maneuvered through the trees and disappeared. At this time the animals on a nearby farm went into a frenzy. The object was briefly sighted approximately an hour later near the back gate.

3. Later in the night a red sun-like object was seen through the trees. It moved about and pulsed. At one point it appeared to throw off glowing particles and then broke into five separate white objects and disappeared. Immediately thereafter, three star like objects were noticed in the sky, two objects to the north and one to the south, all of which were about 10 degrees off of the horizon. The objects moved rapidly in sharp, angular movements and displayed red, green and blue lights. The objects to the north appeared to be elliptical through 8-10 power lens. They then turned to full circles. The objects in the north remained in the sky for an hour or more. The object to the south was visible for two to three hours and beamed down a stream of light from time to time. Numerous individuals, including the undersigned, witnessed the activities in paragraphs 2 and 3.

In an interview with Salley Rayl in 1997 for Microsoft’s ‘Project Watchfire’, Halt commented on the date issue:

“I tried to go back and recover the police blotter and the security blotter [...] to re-affirm the dates. Keep in mind, I wrote the memo several weeks later. And it was not a really important memo. The date was not critical. The critical portion was, you know, ‘what happened and are you interested? And how about getting involved and let’s investigate this’. It’s possible that I put the date down wrong. But I don’t believe so. I tried to verify later and the police blotters had been taken from repository, probably by a – how shall I say – curiosity seeker.”

John Burroughs recently implied that the memorandum was written with another purpose in mind. In a forum post on 20th November 2008, Burroughs wrote:

“[The memo] was written after people started talking about it off base and questions were being asked. The memo has the wrong dates [...] I’m sure it was written that way to cause problems from the beginning.”