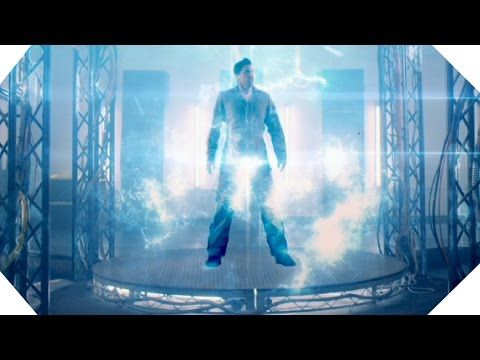 (PhysOrg.com) -- The possibility of going back in time only to kill your ancestors and prevent your own birth has posed a serious problem for potential time travelers, not even considering the technical details of building a time machine. But a new theory proposed by physicists at MIT suggests that this grandfather paradox could be avoided by using quantum teleportation and "post-selecting" what a time traveler could and could not do. So while murdering one’s relatives is unfortunately possible in the present time, such actions would be strictly forbidden if you were to try them during a trip to the past.

The model of time travel proposed by Seth Lloyd, et al., in a recent paper at arXiv.org arises from their investigation of the quantum mechanics of closed timelike curves (CTCs) and search for a theory of gravity. In simple terms, a CTC is a path of spacetime that returns to its starting point. The existence of CTCs is allowed by Einstein’s general relativity, although it was Gödel who first discovered them. As with other implications of his theories, Einstein was a bit disturbed by CTCs.

In the new paper, the scientists explore a particular version of CTCs based on combining quantum teleportation with post-selection, resulting in a theory of post-selected CTCs (P-CTCs). In quantum teleportation, quantum states are entangled so that one state can be transmitted to the other in a different location. The scientists then applied the concept of post-selection, which is the ability to make a computation automatically accept only certain results and disregard others. In this way, post-selection could ensure that only a certain type of state can be teleported. The states that “qualify” to be teleported are those that have been post-selected to be self-consistent prior to being teleported. Only after it has been identified and approved can the state be teleported, so that, in effect, the state is traveling back in time. Under these conditions, time travel could only occur in a self-consistent, non-paradoxical way.

“The formalism of P-CTCs shows that such quantum time travel can be thought of as a kind of quantum tunneling backwards in time, which can take place even in the absence of a classical path from future to past,” the researchers write in their paper. “Because the theory of P-CTCs relies on post-selection, it provides self-consistent resolutions to such paradoxes: anything that happens in a P-CTC can also happen in conventional quantum mechanics with some probability.”

However, the scientists note that prohibiting paradoxical events would cause unlikely events to happen more often. These “strange and counterintuitive effects” arise due to the nonlinear nature of P-CTCs. Like a movie hero who always manages to escape seemingly imminent death, the grandfather would always somehow manage to survive his grandchild’s murderous plots. “Some little quantum fluctuation would whisk the bullet away at the last moment,” Lloyd explained.

In addition to prohibiting the grandfather paradox, the P-CTC theory also has the advantage that it doesn’t require the distortions of spacetime that traditional time travel theories rely on. These spacetime distortions probably only exist in extreme environments such as inside black holes, making these theories nearly impossible to realize.

Although post-selected computations are nonlinear and have not yet been shown to be possible, some studies have shown that quantum mechanics may be nonlinear and allow post-selected computations, which would potentially make quantum computing a very powerful technique. Such a computer could more efficiently solve a complex problem containing lots of variables by running all possible combinations of values and post-selecting only the combinations that solve the problem. This strategy would work much better than the classical strategy of trying different combinations until you get one that works. On the other hand, other studies suggest that quantum mechanics must be linear, in part due to the seemingly impossible things that post-selection allows.

Still, the scientists hope that future investigations will reveal whether or not their theory is correct. They explain that the effect of P-CTCs can be tested by performing quantum teleportation experiments, and by post-selecting only the results that correspond to the desired entangled-state output.

“P-CTCs might also allow time travel in spacetimes without general-relativistic closed timelike curves,” they conclude. “If nature somehow provides the nonlinear dynamics afforded by final-state projection, then it is possible for particles (and, in principle, people) to tunnel from the future to the past.”