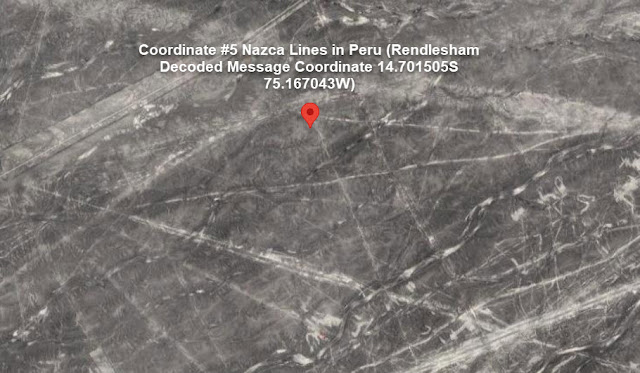 The Nazca lines are among Peru's greatest mysteries.

The lines drawn in geometric patterns and distinct animal shapes across the Peruvian desert have inspired many theories over the years. Here's what we know—and what remains to be seen. 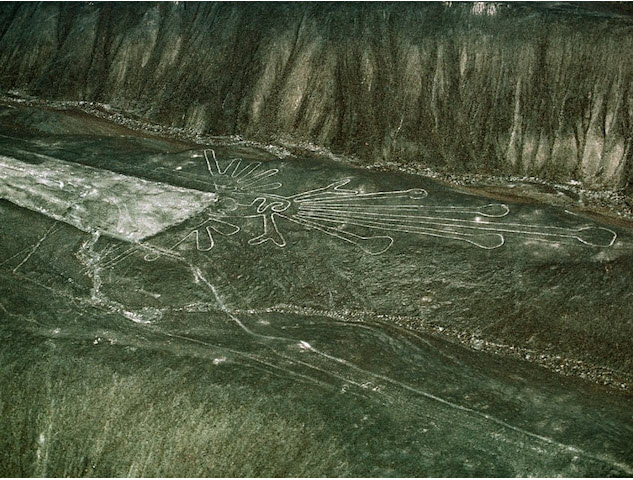 As a plane soars over the high desert of southern Peru, the dull pale sameness of the rocks and sand organize and change form. Distinct white lines gradually evolve from tan and rust-red. Strips of white crisscross a desert so dry that it rains less than an inch every year. The landscape changes as lines take shape to form simple geometric designs: trapezoids, straight lines, rectangles, triangles, and swirls. Some of the swirls and zigzags start to form more distinct shapes: a hummingbird, a spider, a monkey. 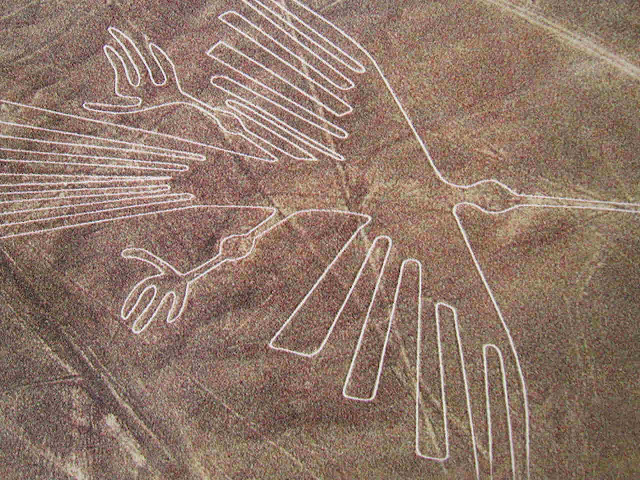 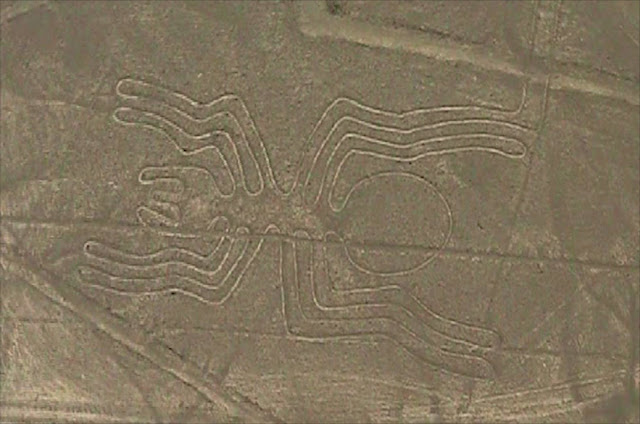 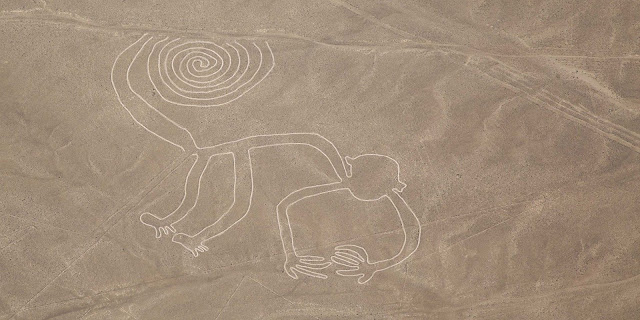 These are the renowned Nazca lines—subject of mystery for over 80 years. How were they formed? What purpose could they have served? Were aliens involved?

The lines are found in a region of Peru just over 200 miles southeast of Lima, near the modern town of Nazca. In total, there are over 800 straight lines, 300 geometric figures and 70 animal and plant designs, also called biomorphs. Some of the straight lines run up to 30 miles, while the biomorphs range from 50 to 1200 feet in length (as large as the Empire State Building). 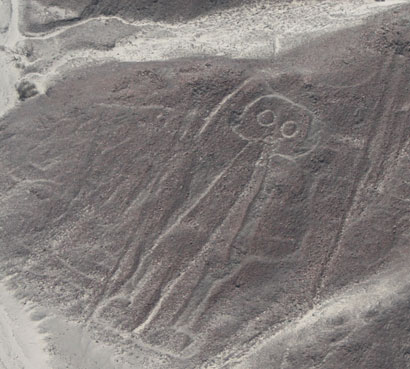 Peruvian archaeologist Toribio Mejia Xesspe was the first to systematically study the lines in 1926. However, since the lines are virtually impossible to identify from ground level, they were only first brought to public awareness with the advent of flight—by pilots flying commercial planes over Peru in the 1930s. American professor Paul Kosok investigated and found himself at the foot of a line on June 22, 1941—just one day after the winter solstice. At the end of a full day studying the lines, Kosok looked up from his work to catch the sunset in direct alignment with the line. Kosok called the 310 square mile stretch of high desert “the largest astronomy book in the world”.

Kosok was followed by the German Maria Reiche, who became known as the Lady of the Lines. Reiche studied the lines for 40 years and fought unyieldingly for her theories on the lines’ astronomical and calendrical purpose (she received a National Geographic grant in 1974 for her work). Reiche battled single-handedly to protect the site; she even lived in a small house near the desert so she could personally protect the lines from reckless visitors.

What are the lines

The lines are known as geoglyphs – drawings on the ground made by removing rocks and earth to create a “negative” image. The rocks which cover the desert have oxidized and weathered to a deep rust color, and when the top 12-15 inches of rock is removed, a light-colored, high contrasting sand is exposed. Because there’s so little rain, wind and erosion, the exposed designs have stayed largely intact for 500 to 2000 years.

Scientists believe that the majority of lines were made by the Nazca people, who flourished from around A.D. 1 to 700.

Certain areas of the pampa look like a well-used chalk board, with lines overlapping other lines, and designs cut through with straight lines of both ancient and more modern origin.

The Kosok-Reiche astronomy theories held true until the 1970s when a group of American researchers arrived in Peru to study the glyphs. This new wave of research started to poke holes in the archeo-astronomy view of the lines (not to mention the radical theories in the ‘60s relating to aliens and ancient astronauts).

Johan Reinhard, a National Geographic Explorer-in-Residence, brought a multidisciplinary approach to the analysis of the lines: “Look at the large ecological system, what’s around Nazca, where were the Nazca people located.” In a region that receives only about 20 minutes of rain per year, water was clearly an important factor.

"It seems likely that most of the lines did not point at anything on the geographical or celestial horizon, but rather led to places where rituals were performed to obtain water and fertility of crops," wrote Reinhard in his book The Nazca Lines: A New Perspective on their Origin and Meanings.

Anthony Aveni, a former National Geographic grantee, agrees, "Our discoveries clearly showed that the straight lines and trapezoids are related to water … but not used to find water, but rather used in connection with rituals."

"The trapezoids are big wide spaces where people can come in and out," says Aveni. "The rituals were likely involved with the ancient need to propitiate or pay a debt to the gods…probably to plead for water."

Reinhard points out that spiral designs and themes have also been found at other ancient Peruvian sites. Animal symbolism is common throughout the Andes and are found in the biomorphs drawn upon the Nazca plain: spiders are believed to be a sign of rain, hummingbirds are associated with fertility, and monkeys are found in the Amazon—an area with an abundance of water.

"No single evaluation proves a theory about the lines, but the combination of archeology, ethnohistory, and anthropology builds a solid case," says Reinhard. Add new technological research to the mix, and there’s no doubt that the world’s understanding of the Nazca lines will continue to evolve?  BY JASON GOLOMB National Geographic Society

Using artificial technology, a team of scientists have found 143 new Nazca Lines, including glyphs of humans, animals, and abstract shapes etched in the Peruvian desert floor. 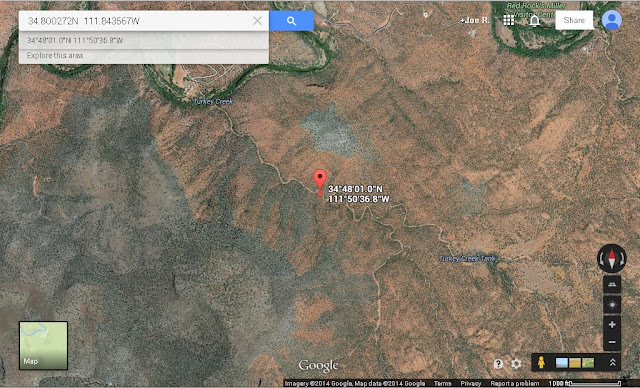 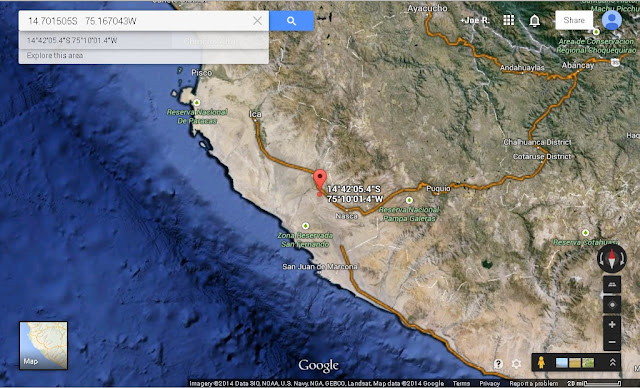 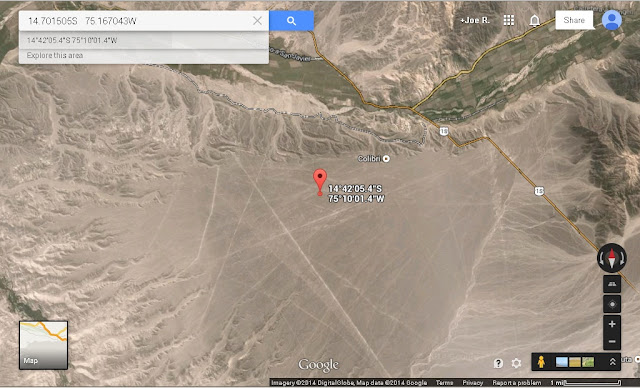