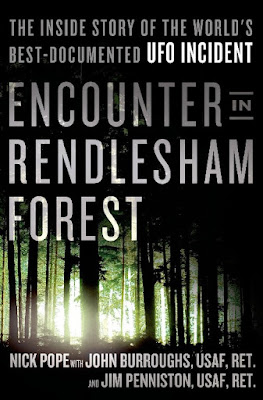 Roswell was only the beginning! An in-depth look at the Rendlesham Forest UFO Incident, the world's most sensational and compelling series of UFO encounters

In 1980, a UFO was tracked on military radar in Rendlesham Forest, England. It landed near two... of the most strategically important military bases in NATO, and was approached by military witnesses who touched the hull. This explosive new book--perfect for fans of Annie Jacobsen's Area 51, and Leslie Kean's UFOs--tells the full story of this incident, which is set to become better-known than Roswell. Written by Nick Pope, an international bestselling author and former government UFO investigator, working closely with John Burroughs and Jim Penniston, the two officers at the heart of the encounters, this book reveals the first-hand witnesses' full stories for the first time and is supported by numerous formerly-classified documents obtained under the Freedom of Information Act. The inside story of these events and their aftermath will change people’s perceptions about the UFO mystery and about the true role played by government, the military and the intelligence agencies.